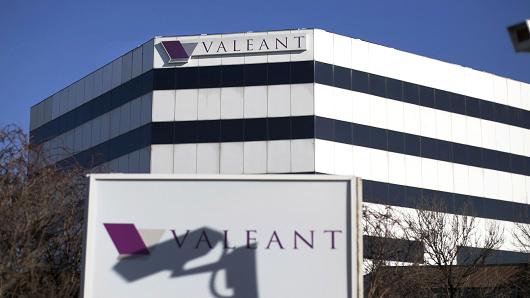 Shares of Valeant Pharmaceuticals International (VRX) rose sharply and fellow specialty drugmaker Perrigo’s (PRGO) fell Friday on reports that the former is about to hire away the latter’s CEO.

Late Thursday, the Wall Street Journal quoted anonymous sources saying that Valeant is hiring Joseph Papa if it can get Perrigo’s board to void a noncompete clause in his contract. On Friday morning, Perrigo issued a brief statement saying that it would not comment on “speculation,” which is the only official word from either company so far.

Valeant has been hunting for a new CEO since March 21, when activist investor William Ackman moved to the board and tried to order the company’s growing chaos. The stock lost more than 80% of its value since a scandal related to a pharmacy partner broke last September, forcing Valeant to strike a new distribution deal with Walgreen Boots Alliance (WBA) that was accompanied by across-the-board price cuts. A disastrous Q4 report and guidance cut, along with an internal investigation that accused former CFO and current board member Howard Schiller of misconduct, eventually turned even bullish analysts against Valeant’s management.

Papa, meanwhile, has run Perrigo for 10 years and has a largely successful track record. Under his watch, the company’s revenue has more than tripled, the stock has climbed eightfold, an inversion deal moved headquarters to low-tax Dublin, and Mylan (MYL) attempted a hostile takeover that Perrigo successfully fought off.

Perrigo’s once-steady profit growth has gotten uneven in the last couple of years, however, and the stock has declined more than 40% since its Mylan-induced high last April. It currently holds a mediocre IBD Composite Rating of 40.

This change has led some analysts to worry about the implications of Papa’s departure for Perrigo.

“Papa has become the face of Perrigo during his long tenure as CEO,” wrote Jefferies analyst David Steinberg in a research note. “However, with the exception of CFO Judy Brown, the company’s other executives — including John Hendrickson, who was appointed President in Oct. 2015 — are largely unfamiliar to the investment community.

“Further, the timing couldn’t have been more inopportune. Mr. Papa is potentially departing prior to the announcement of Q1 results, and this follows a string of difficult quarterly financials — particularly in the company’s flagship consumer business.”

Guggenheim analyst Louise Chen agreed, noting that Perrigo is widely expected to miss Q1 estimates and lower its guidance. “There has been debate about senior management change at Perrigo, but we don’t think the Street was thinking that it would actually happen or be this soon,” Chen wrote.

Perrigo stock fell nearly 6% in afternoon trading on the stock market today, near 121.50 and hitting its lowest level intraday since August 2013. Valeant stock was up more than 6%, near 35.50.