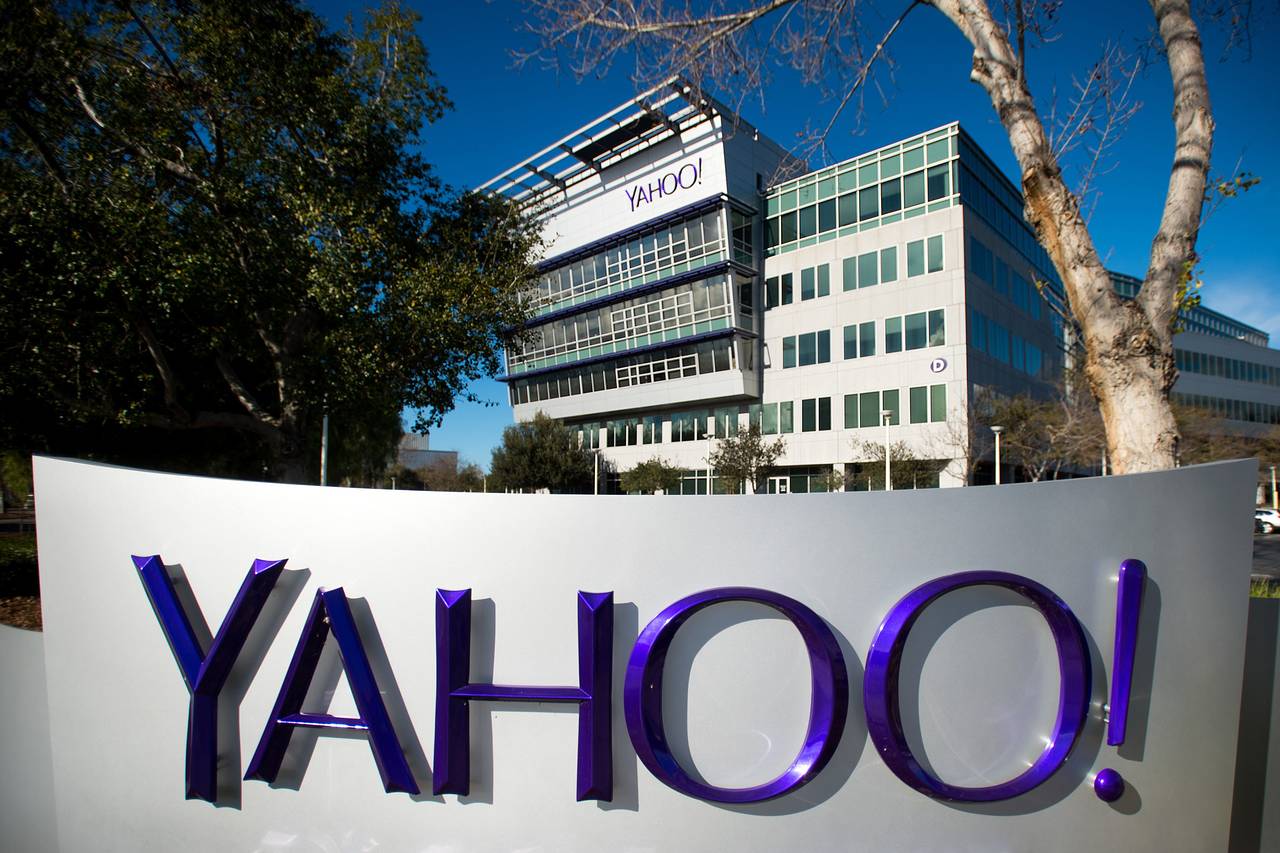 Suitors for Yahoo Inc. got a reminder of the challenges facing the struggling Web business on Tuesday when the company again reported fast-shrinking revenue.

The Internet portal said its revenue dropped 18% to $859.4 million, excluding commissions paid to search partners, the first time that figure has fallen below $1 billion since Chief Executive Marissa Mayer took the reins nearly four years ago.

Ms. Mayer, on a video call with analysts, put a brave face on the company’s flagging financials, calling the quarter a “good start to the year.” But she also stressed to investors that Yahoo’s management has made an auction process for the company the “top priority” as the deadline passed Monday for preliminary bids.

Two other private-equity firms, Silver Lake and Advent International, had also expressed interest in bidding around the time of Yahoo’s deadline, people familiar with the matter said. 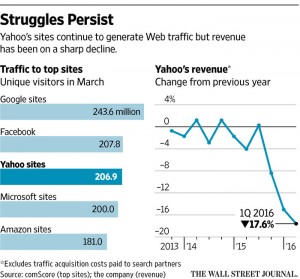 Most of the bids came in the range of between $4 billion and $8 billion, a person familiar with the process said.

The company now plans to choose which bidders move on before providing them with access to more financial data and setting a deadline for final bids, the person said.

Ms. Mayer didn’t identify any of the bidders or disclose further details about the auction process.

“Our board and management team are fully committed to maximizing value for shareholders and are completely aligned in the pursuit of strategic alternatives,” she said.

Yahoo is under pressure to show progress toward a sale by the time the company holds its annual shareholder meeting this summer, when investors will likely vote on Starboard Value LP’s proposal to replace the entire nine-person board with a new slate of directors.

Starboard has criticized Yahoo for moving too slowly to sell the company and for potential conflicts of interest in involving Ms. Mayer too closely in the sale process. Potential buyers have also expressed frustration that Yahoo’s managers have failed to answer detailed questions about its business prospects, people familiar with the process told The Wall Street Journal earlier this month.

“There is a fair amount of skepticism about their willingness to really sell the business,”Youssef Squali, analyst at Cantor Fitzgerald, said in an interview.

Ms. Mayer addressed those concerns at the start of the analysts’ call, saying management has talked to the strategic review committee daily through phone and in-person meetings, answered hundreds of questions about the business and set up a data room to give suitors insight into its financial metrics.

“The management team and I have supported the board’s process from the start,” she said, “and we are moving expeditiously.”

Ms. Mayer punctuated her assessment of the business with reflective remarks that attempted to summarize her legacy at Yahoo. “Over the past three and a half years, we took a company that, despite its rich history, faced revenue declines, and moved towards a Yahoo that is stronger and more modern,” she said.

Yahoo’s core business could be worth between $4 billion and $5 billion, Mr. Squali estimated. That excludes the value of real estate and patents, which he estimates could be worth an additional $1 billion to $2 billion.

The company said it ended the quarter with $7.1 billion in cash. Yahoo also owns stakes inAlibaba Group Holding Ltd. and Yahoo Japan, currently worth about $23 billion and $10 billion, respectively, not including the tax bill that would arise from a sale of those assets.

Yahoo’s ability to fetch a high price for its assets may be hampered by its declining performance. Overall, revenue fell 11% to $1.09 billion, edging in above the $1.08 billion predicted by a consensus of analysts. Yahoo posted a loss of $99.2 million, or 10 cents a share, compared with a year-earlier profit of 2 cents a share.

Notably, the segment of Yahoo’s business that Ms. Mayer has designated as the growth engine is slowing down dramatically. Revenue from “Mavens”—a financial metric the company introduced last year to track mobile, video, native and social ads—rose 6.8% from the prior year to $390 million. That compares with 26% in last year’s fourth quarter, 43% in the third period and 60% in the second quarter.

Part of that slowdown is due to increasing competition in mobile search. Revenue from search ads, excluding commissions, declined 21% to $347.7 million.

Potential buyers could benefit from a licensing relationship with Yahoo Japan that delivers Yahoo about $200 million in pure profit annually, finance chief Ken Goldmansaid on the call with analysts. About half of those fees are set to expire in August 2017, but another component has no expiration date, Mr. Goldman said.

Yahoo has worked to reduce costs by trimming staff and shuttering products, including seven digital magazines. Yahoo said achieved $297 million in free cash flow in part from these cost-cutting efforts.

Yahoo is still losing ground to Alphabet Inc. and Facebook Inc. This year, Yahoo will claim 1.5% of the global market for online ads, down from a 2.4% share last year, estimates eMarketer Inc.

—Matt Jarzemsky contributed to this article.