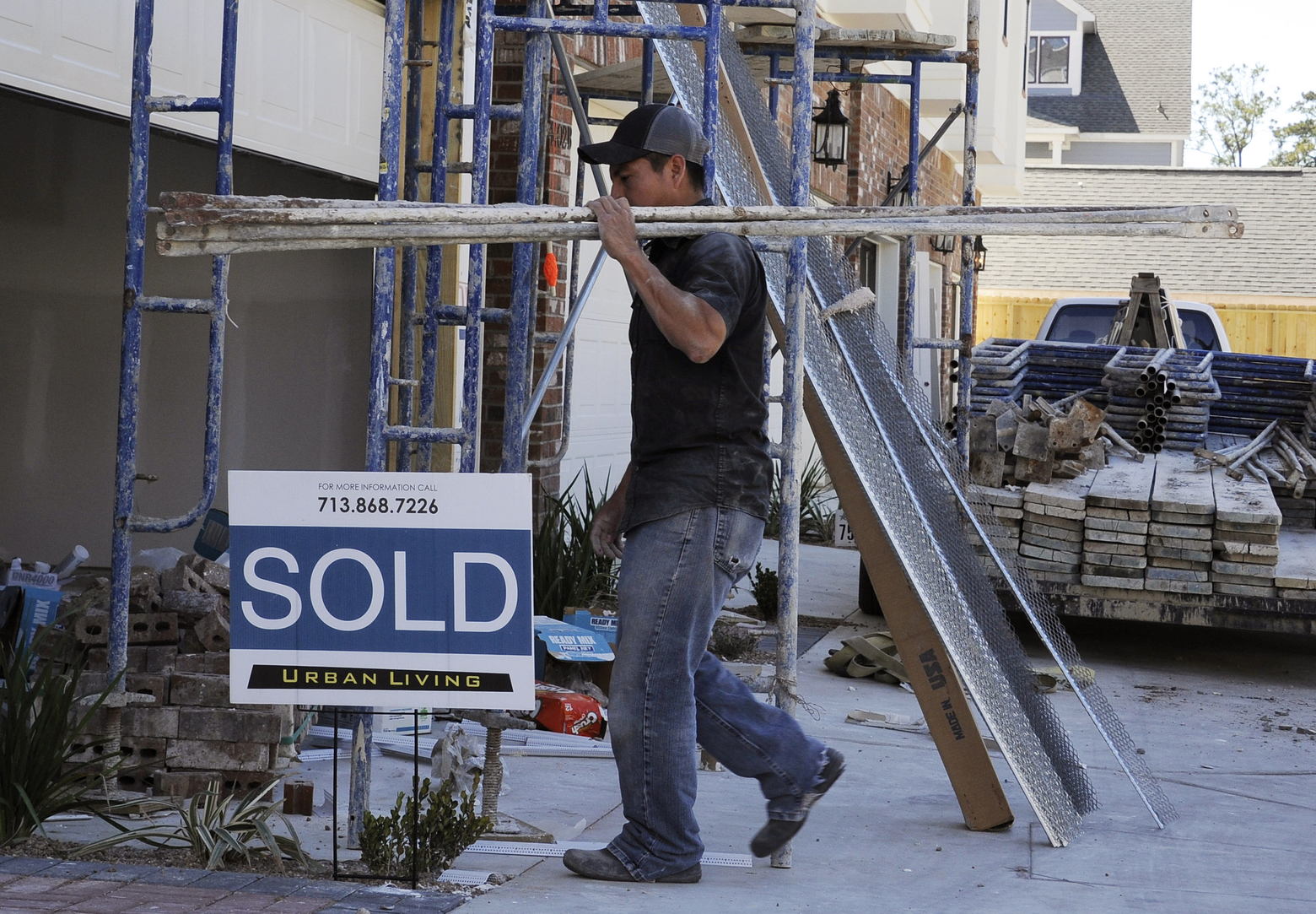 FILE – In this Tuesday, Feb. 16, 2016, file photo, a worker walks past a “Sold” sign at a construction site of new townhouses, in Houston. On Tuesday, May 17, 2016, the Commerce Department reports on U.S. home construction in April. (AP Photo/Pat Sullivan, File)

WASHINGTON (AP) — Builders ramped up construction of new homes in April, suggesting that the market remains solid despite sluggish economic growth at the beginning of the year.

Housing starts climbed 6.6 percent to a seasonally adjusted annual rate of 1.17 million units, the Commerce Department said Tuesday. The increase makes up for much of March’s 9.4 percent drop in starts, a decline that partially reflected the volatile swings in residential construction on a monthly basis.

Ground breakings are running ahead of last year’s pace, largely because of a dramatic increase in the construction of single-family houses, especially in the Midwest and South. Relatively few existing homes are listed for sale, creating an incentive for developers to expand supplies through building during a period of low mortgage rates.

But a slow economy and turbulent stock market has overlapped with construction slipping so far this year in the West, where housing is generally more expensive.

“This was a decent report and shows that housing will continue to be one of the stronger pillars of the U.S. economy, as long as rates stay relatively low and job growth continues,” said Jennifer Lee, a senior economist at BMO Capital Markets.

During the first four months of the year, home construction has advanced 10.2 percent. Single-family houses account for much of that gain. Apartment construction_a major driver of growth in recent years as more Americans shifted to rentals_has dipped slightly so far this year, although the sector drove much of the gains in April.

Applications for permits to build new homes, an indicator of future activity, rose 3.6 percent in April to an annual rate of 1.12 million.

The residential market has yet to fully recover from the dramatic crash brought about by a flood of subprime mortgages nearly a decade ago. Home construction remains well below its annual pace of roughly 1.5 million during the 1990s, a reflection of both higher housing costs and the damaged financial credit that remains more than 6 ½ years after the recession officially ended.

But builders expect customers to come back into the market as home values rebound.

The National Association of Home Builders/Wells Fargo builder sentiment index released Monday held at 58 in May for the fourth straight month.

Readings above 50 indicate more builders view sales conditions as good, rather than poor. The index had been in the low 60s for eight months until February. Builders’ outlook for sales over the next six months increased to the highest level since December.