The tech industry, where a dearth of talent is driving up annual salaries well past $100,000, dominates a new list of the top-paying companies in the U.S.

Companies including Alphabet Inc.’s Google, Facebook Inc. and Twitter Inc. all pay median compensation of at least $150,000 a year, according to a study published Wednesday by online career site Glassdoor Inc. Tech firms make up 20 of the 25 highest-paying companies in the U.S. in 2016, according to salary data users provided to Glassdoor.

Consulting firms such as A.T. Kearney Inc. and PricewaterhouseCoopers LLP’s Strategy& are the only ones to top tech companies, according to the study. Juniper Networks Inc., a networking equipment maker, is the highest-paying tech company on the list, coming in at number three with median compensation of $157,000. The only company outside tech and consulting to break the top 25 is Visa Inc. 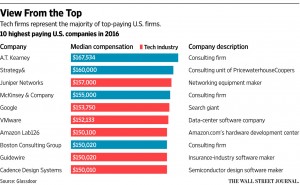 Tech firms make up 20 of the 25 highest-paying companies in the U.S. in 2016, according to online career site Glassdoor Inc.

“In technology, we continue to see unprecedented salaries as the war for talent is still very active, largely due to the ongoing shortage of highly skilled workers needed,” said Andrew Chamberlain, Glassdoor’s chief economist.

Tech salaries have risen in the past year. In 2015, when Glassdoor compiled similar data for the 15 highest-paying companies in the U.S., many of the same tech firms ranked on the list, albeit with lower salaries. Median total compensation at data-center software companyVMware Inc. rose to $152,133 this year, from $145,000 last year, according to Glassdoor.

Glassdoor compiled salary reports about companies whose employees have shared information within the past year. The firm measured base salary as well as overall compensation, which includes extras such as commissions and bonuses. Glassdoor, which has about 12 million workplace reviews and millions of salary reports, only included in the study companies that had at least 50 salary reports from U.S.-based employees.

Yahoo Inc., which on Tuesday again reported fast-shrinking revenue, also wasn’t among the top 25 companies with its median compensation of $129,940. Chip maker Intel Corp.,which announced 12,000 layoffs on Tuesday, has a median total compensation of $118,800.

Mr. Dobroski noted that Uber Technologies Inc. didn’t make the list of top-paying firms because Glassdoor included the salaries of the company’s on-demand drivers, in addition to the company’s staff employees. The company faces a class-action lawsuit claiming the company improperly classifies its drivers as independent contractors.