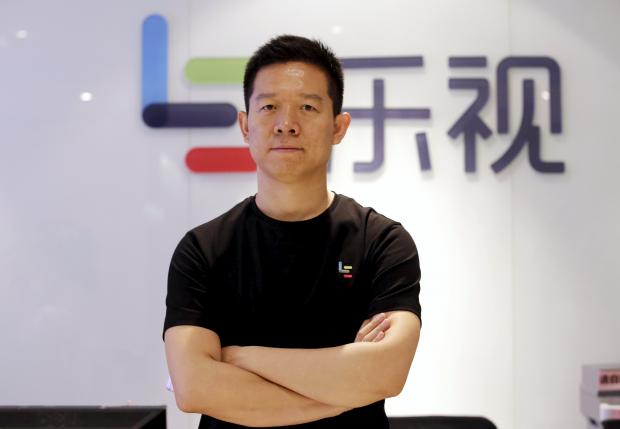 Tomorrow’s cars will be all-electric, self-driving, connected to high-speed communications networks … and free.

That, at least, is the vision of Jia Yueting, a billionaire entrepreneur and one of a new breed of Chinese who see their technology expertise re-engineering the automobile industry, and usurping Tesla Motors (TSLA.O), a U.S. pioneer in premium electric vehicle (EV) making.

“Tesla’s a great company and has taken the global car industry to the EV era,” Jia said in an interview at the Beijing headquarters of his Le Holdings Co, or LeEco. “But we’re not just building a car. We consider the car a smart mobile device on four wheels, essentially no different to a cellphone or tablet.

“We hope to surpass Tesla and lead the industry leapfrogging to a new age,” said Jia, wearing a black T-shirt and jeans.

A wave of EV start-ups has emerged in China after the government opened up the auto industry to deep-pocketed technology firms to drive a switch to cleaner electric as an eventual alternative to gasoline cars. Sceptics wonder just how start-ups like LeEco will deliver on their grand visions.

As a sign of intent, 43-year-old Jia last week unveiled the LeSEE electric concept supercar, a rival to Tesla’s Model S. The “smart, connected and self-driving” car will be displayed at this week’s Beijing autoshow.

“People questioned our idea, a small IT company building a car to compete with the BMWs (BMWG.DE) and Teslas of the world, and laughed at us. It wasn’t easy, but here we are,” Jia told Reuters.

LeEco hopes to start producing a version of the LeSEE in a few years at a plant being built near Las Vegas by U.S. strategic partner Faraday Future, in which Jia has invested. Those cars would be sold in the United States and China. Further ahead, the plan is to produce electric cars in China, too, probably through a partnership with BAIC Motor (1958.HK).

The web-connected electric cars will have a “disruptive” pricing model similar to phones and TV sets LeEco markets in China, Jia says. His company, often called China’s Netflix, will sell movies, TV shows, music and other content and services to drivers of its cars. That’s why he says “one day our cars will be free.” Nearer-term, the disruption is more likely to be “double the performance at half the price.”

Beyond LeEco, Chinese tech heavyweights including Baidu (BIDU.O), Alibaba (BABA.N), Tencent (0700.HK) and Xiaomi [XTC.UL] have funded more than half a dozen EV start-ups, such as NextEV and CH-Auto. It’s widely expected China’s bus, taxi and courier firms will be encouraged to go electric.

“We define our car in a whole new way … instead of copying Apple (AAPL.O) and Tesla,” LeEco co-founder and vice chairman Hank Liu told Reuters. “Our products are not upgraded from those that already exist. They are revolutionary … products that never existed before.”

While the entry barrier has been lowered as electric cars are, mechanically, relatively simpler to produce, skeptics query how China’s start-ups will fund and make tens of thousands of industry-changing EVs – from design through to procuring the 10,000 or so parts and systems needed for the finished product.

Daimler (DAIGn.DE) said Hubertus Troska, head of its Greater China business, was invited to LeEco last month to get to know the company and its business model.

“I told Mr. Troska we’re going to redefine the car,” Liu told Reuters. “EVs for us are just another screen. We see cars in the future as an extension of the Internet, another entry point for us to sell web-based content and services.”

Jia has also had to overcome questions on his funding. In the past three years, there was speculation he had disappeared and had his passport confiscated because of his ties to a brother of Ling Jihua, a high-ranking Communist Party official who was arrested last year and is under investigation for graft.

Jia says he did not go missing, but was in a California hotel researching Tesla and recruiting a team to develop EV technologies. “It was a difficult time for me because we faced a lot of external rumors and internal turmoil,” he said, noting LeEco was then expanding beyond its streaming, mobile and TV businesses. “(If) any of those ventures failed, we could have gone belly up,’ he said.

To help fund LeEco’s EV push, Jia’s sister sold her stake in the company and lent the money to him interest-free. He also sold part of his own stake.

He said Ling Wancheng, the disgraced official’s brother, is a “mere financial investor” in LeEco; he never met Ling Jihua; and his passport was never confiscated.

Growing up in a rural Shanxi town in northern China, Jia worked briefly as a computer technician at a tax office before setting out on his own, selling computer accessories, and running restaurants and private schools. Acting on a tip from a relative, he began selling batteries to power cellphone tower antennas – just as China Telecom pushed into the rural hinterlands.

In 2003, he drove his used Toyota to Beijing, with 200,000 yuan (around $31,000 at current rates) in cash, seeking to grow his Sinotel Technologies business by adding simple mobile video streaming. He took the company public in Singapore in 2007. With Liu, he registered what is now LeEco – a group now employing 11,000 people in China, India and the United States. Its listed business had 2014 revenue of 6.8 billion yuan ($1.05 billion).

Colleagues and friends say Jia is a shrewd businessman, “generous in picking up the tab for meals” and “never stops working.” Forbes values him at $4.8 billion.

To vault from LeEco’s IT background to the auto industry, Jia has built ties with California-based Atieva and Faraday Future, and has a partnership with Aston Martin and a cooperative relationship with BAIC.

Ding Lei, LeEco’s auto chief and a former top official at General Motors’ (GM.N) China venture with SAIC Motor (600104.SS), says part of LeEco’s advantage in tomorrow’s auto industry is that it carries no baggage from today’s. Traditional automakers are too wedded to combustion engine technology to quickly jump to electric technology, he reckons.

“Look, this disruption can’t come from traditional OEMs (automakers). But a company like us, we can go directly to pure electric cars.”