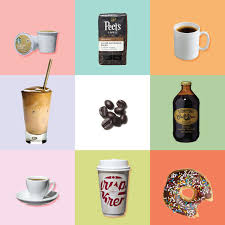 America’s Coffee JAB, a European holding company that once made pool chemicals, is building a coffee empire out of a disparate group of brands

Here’s a question with billions of dollars riding on the answer: What do these American brands have in common? Peet’s, Panera Bread, Krispy Kreme, Dr Pepper and Stumptown.

They are all owned by JAB, a secretive European holding company that 50 years ago was making industrial chemicals for swimming pools. Through multiple deals, the firm has stumped its publicly traded rivals with what seemed like a mildly eccentric and expensive shopping spree.

“I’m sure there’s some towering strategic logic,” PepsiCo Inc. CEO Indra Nooyi said during a recent earnings call, “but we are still searching for it.”

Interviews with JAB executives, directors and portfolio companies offer an answer. The company is mashing together a fragmented industry to create a caffeine-fueled global powerhouse.

JAB wants its coffee brands to be everywhere its customers are. 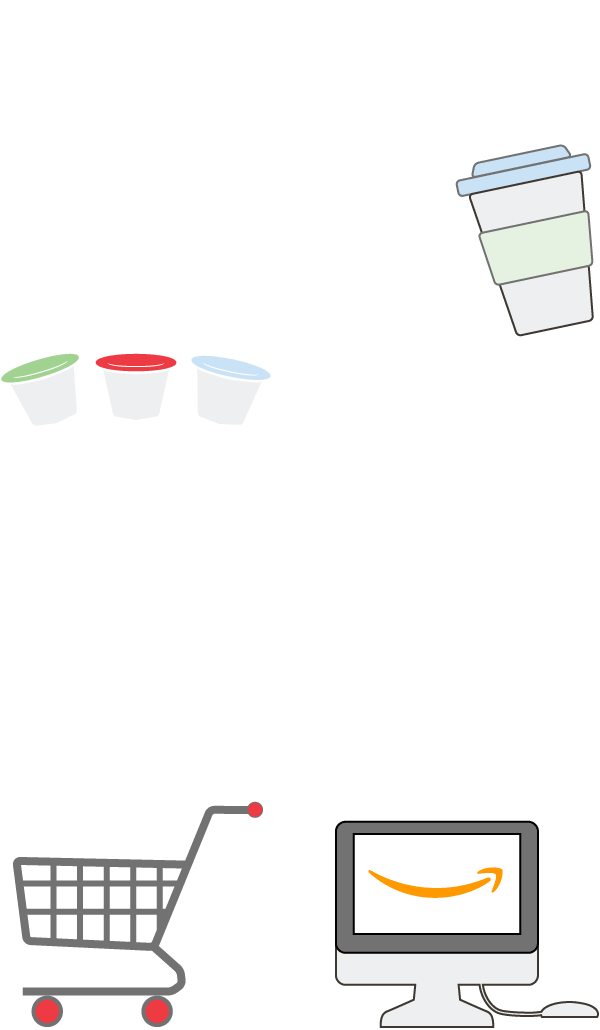 Brew a cup of coffee from one of JAB’s Keurig machines. K-cups contain coffee from JAB brands, and competitors such as:

Recharge with a cold brew while shopping for JAB-owned products:

JAB today sells coffee in nearly every form and venue. It distributes brands it doesn’t own such as Dunkin’ Donuts and Starbucks for its Keurig coffee maker in single-serve K-cups to brew at home and at work. It sells its own brands of bottled cold coffee and bags of beans, such as Peet’s and Green Mountain. With its own bakeries and coffee shops, it competes directly with America’s biggest coffee chains.

The group’s approach to the coffee business amounts to an expensive bet that the U.S. beverage industry is on the cusp of a reorganization that has been half a century in the making, ending an era in which hot drinks only competed against hot drinks and soft drinks against other soft drinks.

“JAB wants to become the largest coffee company in the world,” Starbucks Chairman Howard Schultz said at an investment conference last year. In its sights is the industry leader, Nestlé SA .

The scale of JAB’s ambitions became clear only in late January, when it emerged seemingly out of nowhere through its Keurig company to make a $26 billion deal to buy Dr Pepper Snapple Group Inc., the third-biggest soft-drink company in the U.S. That gave the company a national network to distribute its cold-brew coffees.

In January, in Plano, Texas, Dr Pepper CEO Larry Young stood in front of employees packed into the town hall eager to understand what the purchase meant.

“I’ve never seen this many people in here—I know there’s gotta be a brisket in here somewhere,” Mr. Young said.

He told the crowd that merging with Keurig would make the company bigger and more competitive. “And they’re also looking at going to ready-to-drink coffees, cold coffees,” he told employees. “We are a perfect fit for that. We’re the guys who know how to get that out.”

JAB’s name derives from the initials of 19th-century German businessman Johann Adam Benckiser. Half a century ago, it was family run and making industrial chemicals used for water treatment and to clean the outside of merchant ships. Today, the company is controlled by three partners—one Dutch, one German and one French—with a combined 90 years of experience selling products from candy to condoms.

“The consumer wants choice,” Bart Becht, a Dutch national and the chairman of JAB, said in an interview about the group’s beverage strategy “both in terms of beverage and location. We’re simply going to where the consumer is or wants to be.”

At his 14th-floor offices near London’s Paddington Station, Mr. Becht takes meetings in a room decorated with one piece of art: a photo of a coffee farmer raking beans to dry in the sun. JAB’s two other leaders, Olivier Goudet and Peter Harf, and their eight junior partners shuttle between London, Amsterdam and New York. 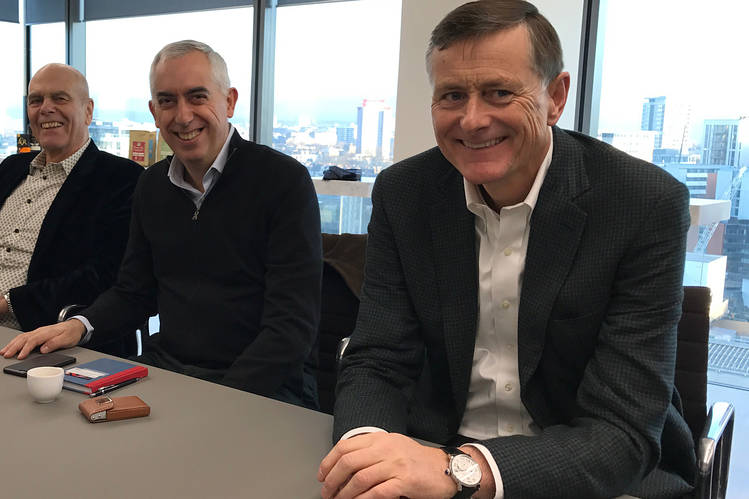 JAB is betting the industry is in the midst of realignment as it catches up with drinkers who consume coffee throughout the day.

“If you go back in the U.S. 20 or 30 years ago, people would have their hot coffee in the morning and drink their Coke in the afternoon,” Mr. Becht said. “That has changed today.”

Millennials weaned onto coffee with drinks like the Frappuccino have entered the workforce en masse and are the best coffee drinkers ever, Mr. Becht said.

Americans love their coffee, especially if it comes in a bottle or can. 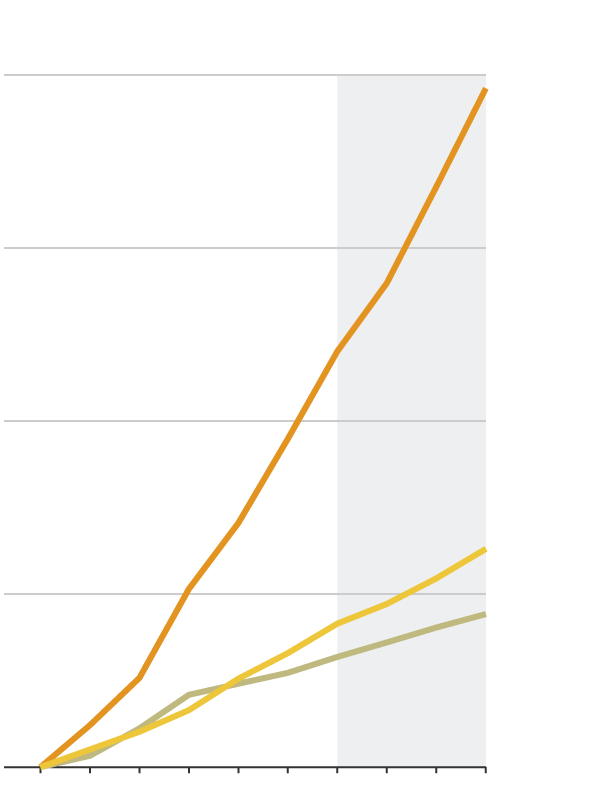 Percentage change in sales since 2012

Sales of ready-to-drink coffee sold in cans or bottles at supermarkets and convenience stores have taken off in just the last couple of years. Bottled coffee has become a popular drink with young consumers, in particular, because it is convenient and often cheaper than the specialty coffee drinks sold in coffee shops, according to market research firm Mintel.

JAB traces its roots to when its founder Mr. Benckiser bought by chance a hydrochloric acid and ammonium chloride laboratory in Pforzheim, Germany, from its indebted owners in 1823.

He gave a young chemist, Ludwig Reimann, full control of the lab. Mr. Reimann had discovered and named nicotine with a partner at the University of Heidelberg. By World War I, the firm had become the top producer in the world of citric acids, the sour ingredient in soda and candy that tickles the tongue and makes the eyes water.

Four generations of Reimanns, most of them chemists, ran the company until passing it off to professional managers in 1978, when the business began to morph into an investment vehicle.

Since its three partners, all M.B.A.s with backgrounds in consumer goods, began steering JAB into the coffee business in 2012, JAB has more than doubled its equity value—a measure of holdings plus cash, minus debt—to $20 billion, Mr. Becht said. As of the start of the year, JAB had $70 billion in assets under management.

The Dr Pepper deal positions JAB to compete more strongly with Nestlé, the biggest coffee company in the world by revenue and volume. It owns Nescafe, the top-selling coffee brand in the world, and the Nespresso machine, the European answer to the Keurig single-serve brewer.

Since JAB got into the space, Nestlé has been shoring up its position with its recent acquisition of American coffee company Chameleon Cold-Brew and a majority stake in Blue Bottle Coffee, both makers of ready-to-drink coffee.

“The fight is not with Starbucks,” Mr. Becht said. “The competitor…is Nestlé.”

While Starbucks is a powerful brand, it is primarily limited to its own shops and sales in grocery stores. JAB, through a licensing deal with Starbucks, distributes Starbucks K-cups for its Keurig single-cup coffee makers. 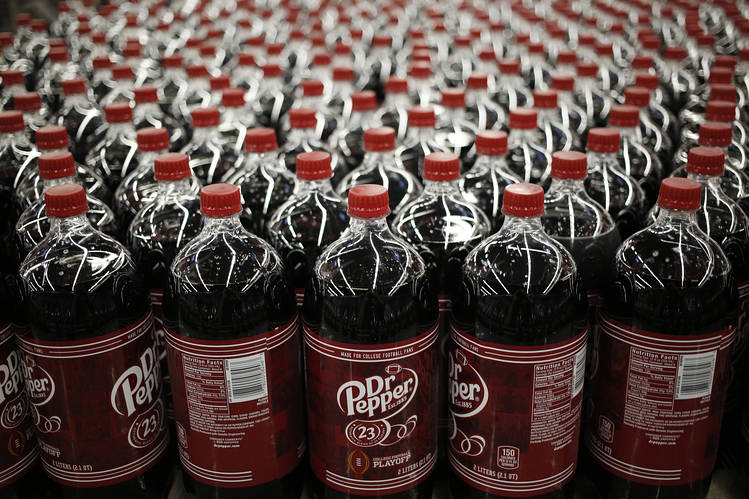 Privately held JAB doesn’t release total sales figures for all the companies it owns, however Keurig Dr Pepper would have had combined sales of $10.83 billion in 2017, according to company filings. The new company will be publicly traded, but JAB and its minority partners in Keurig including Mondelēz International, Inc.will own 87% of the shares.

Nestlé executives haven’t commented on JAB in public and declined a request for an interview. In a written statement, Carsten Fredholm, the head of Nestlé’s beverages strategic business unit, said “coffee is one of our high-growth categories across more than 180 countries around the world.” The company “will continue to focus on maintaining our leading position by investing in high-quality and breakthrough innovations across various coffee formats.”

When JAB bought Peet’s Coffee in 2012, the small Emeryville, Calif.-based coffee chain was struggling to compete with Starbucks in the retail arena and with Kraft, the maker of Maxwell House coffee, in the supermarket aisles.

“Peet’s was stuck in a box. It didn’t have the resources to compete” in different venues, said Dave Burwick, Peet’s CEO. “JAB saved Peet’s.”

Once it was taken private by JAB, Mr. Burwick said, he could focus less on quarterly earnings and more on generating cash to expand the business. He reduced inventory, extended payment periods to suppliers, and gave retail customers discounts for paying early. That freed up cash to invest in expansion.

“They don’t give us money, they give us ways to create money,” Mr. Burwick said of JAB.

Peet’s used the cash it generated to expand into single-serve K-cups used in Keurig machines and to buy the high-end coffee chains Stumptown and Intelligentsia, along with the tea company Mighty Leaf. It also developed a chilled direct-store distribution network to get cold coffee and other beverages into grocery stores.

Making and distributing cold-brewed coffee, in particular, is challenging and expensive because it requires a lot of coffee beans to extract the flavor. Multiple players are involved in the supply chain, each taking a cut of the profit, from the co-packers that make the concentrate to the bottling companies that package it, and the refrigerated trucks that ship them to stores. By controlling both the brands and the distribution, Peet’s was able to make and get the products to stores more efficiently.

European holding company JAB has been on a coffee-buying spree in recent years, and hopes its latest Dr Pepper deal will help with distribution of bottled coffees

JAB bought Keurig Green Mountain in 2016 for $13.9 billion, and set about expanding the Waterbury, Vt., coffee company’s roster of brands to brew in its machines.

As a publicly traded company, Keurig had faced slowing growth of its K-cups as patents expired and copycats entered the market, and had poorly managed Wall Street expectations.

But Keurig had deals with dozens of brands—some through partnerships with other companies—including Swiss Miss, Dunkin’ Donuts, McDonald’s McCafe brand and Gevalia. Its brewer could also make tea from Lipton, Twinings, Tazo and Tetley.

JAB hired Bob Gamgort from the packaged foods industry to run Keurig. He discounted the price of capsules to encourage a growth in sales and focused on adding more brands to the company’s brewer system. Following the same approach as Peet’s, he fine-tuned payment periods to maximize Keurig’s cash flow.

Mr. Gamgort began showing up at coffee shops at 5:30 in the morning to watch how and what coffee drinkers were ordering.

To sweeten the deal for its K-cup brands, the company has begun selling the first Wi-Fi connected home coffee makers—15,000 have been sold so far—that can feed data back to companies such as Starbucks so they can learn which roasts consumers drink at what time of the day in which part of the country.

“It allows you to educate your partner,” Mr. Becht said. “What size do they drink, which flavor do they drink in Boston versus Los Angeles,” he said.

Mr. Gamgort, the Keurig CEO, often arrives at meetings holding Starbucks coffee cups to the raised eyebrows of colleagues who say he shouldn’t be endorsing the competition.

His answer to that: “They are our No. 1 partner,” Mr. Gamgort said.

Keurig is offering distribution services to an increasingly broad network of outside brands through its Dr Pepper Snapple deal. It will also be able to sell its coffee, part of an armada of 125 beverage brands, to new customers.

Peet’s distribution system is a regional one that doesn’t cover certain retailers such as convenience stores, popular stops for consumers who don’t want to wait in line at larger stores. Dr Pepper’s larger fleet will enable Peet’s ready-to-drink beverages to get into more stores.

Mr. Gamgort, who will be CEO of the merged company, told investors in January: “We’re indifferent as to where the consumer goes because we’re there to be able to deliver products to our consumers everywhere.”

—Saabira Chaudhuri in London and Cara Lombardo in New York contributed to this article.

Write to Zeke Turner at Zeke.Turner@wsj.com and Julie Jargon at julie.jargon@wsj.com