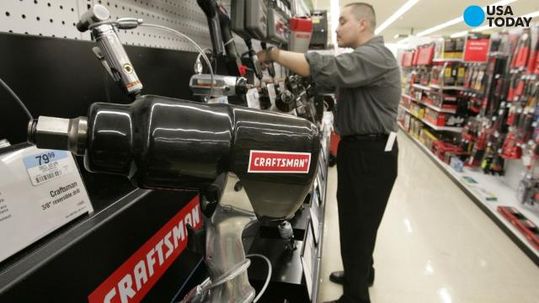 The ailing retailer said Thursday that it had reached a deal to sell the tools brand to Stanley Black & Decker for a net present value of about $900 million, including future royalty payments. USA TODAY

Department-store chain Sears Holdings is seeking to stem its bleeding by closing another 150 stores, including 108 Kmart locations, and selling its Craftsman brand to raise cash.

The ailing retailer said Thursday that it had reached a deal to sell the tools brand to Stanley Black & Decker for a net present value of about $900 million, including future royalty payments.

The move came several months after Sears put the Craftsman, Kenmore and DieHard brands up for sale as it seeks an elusive turnaround.

The company said late Tuesday that it would close 108 Kmart stores and 42 Sears stores, calling it “a difficult but necessary step as we take actions to strengthen the company’s operations and fund its transformation.”

‘We have fallen short’: More losses for Sears

Sears also announced Tuesday that it had landed access to $500 million in secured loans provided by Sears CEO and Chairman Edward Lampert’s ESL Investments. Lampert has invested heavily in Sears as he attempts to revitalize the retailer.

Taken together, the steps reflect Sears’ latest bid to stay afloat in a retail market that is weakening big-box chains, including competitors such as Macy’s and Kohl’s. Macy’s on Tuesday identified 68 stores it will close or that have already closed and said it will correspond with about 6,200 job cuts, including management positions at central operations.

Selling the Craftsman brand to Stanley Black & Decker bolsters the balance sheet for Sears, which reported a $748 million loss in its fiscal quarter ended Oct. 29 as sales at stores open at least a year fell 7.4%.

The chain will still operate more than 1,300 stores following the latest closures and will continue to sell the Craftsman brand.

Macy’s is closing these 68 stores: Is yours on the list?

Stanley Black & Decker said it would expand sales and manufacturing of the Craftsman brand, which currently gets 90% of its sales from Sears locations.

“This transaction represents a significant step in our ongoing transformation to a membership focused business model,” Lampert said in a statement. “Craftsman has a storied history as an iconic American brand and in Stanley Black & Decker we have found a great owner that is committed to expanding Craftsman and helping it to reach its potential outside of its current channels.”