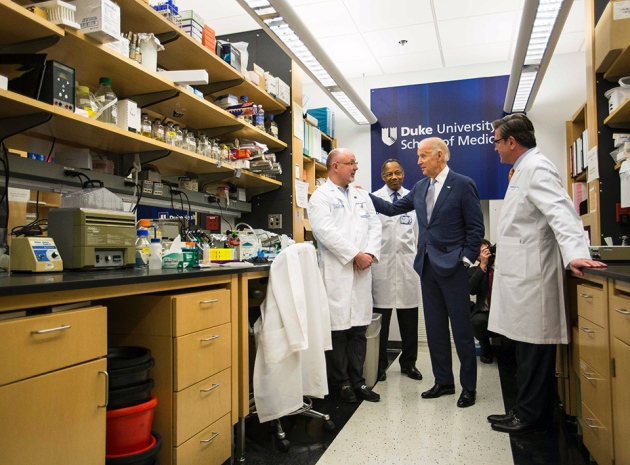 The recent launch of multiple major US cancer initiatives has infused cash into immunotherapy, one of the most promising new methods of cancer treatment. But researchers warn that the money may be wasted without concrete plans to coordinate the programmes.

“There’s a lack of overt leadership, and in the absence of a logical strategy we have a tendency to throw plates of spaghetti against the wall and hope it sticks,” says Ira Mellman, vice-president of cancer immunology at the biotechnology company Genentech in South San Francisco, California.

The broadest programme is the US govern­ment’s National Cancer Moonshot, which hopes to receive US$1 billion by next year for 8 areas of cancer research. Immunotherapy, whichrecalibrates the body’s own immune defence against cancer, is among them. It “is poised to be a critical part of our nation’s anticancer strategy”, the project’s leader, US vice-president Joe Biden, said last week at the annual meeting of the American Association for Cancer Research (AACR) in New Orleans, Louisiana.

An advisory panel will release more-detailed plans for the government programme in June. Meanwhile, three privately funded immuno­therapy research projects are gearing up: the $250-million Parker Institute for Cancer Immunotherapy, funded by Sean Parker, co-founder of the music-file-sharing company Napster, and announced on 13 April; a $125-million Immunotherapy Center at Johns Hopkins University in Baltimore, Maryland, unveiled in March; and the Cancer MoonShot 2020 Program, announced in January by biotechnology billionaire Patrick Soon-Shiong.

This sudden proliferation of cancer initiatives is reminiscent of the spate of brain-research projects launched in the past few years — some of which have foundered through poor leadership. Europe’s Human Brain Project, for instance, almost ran aground after a series of top-down decisions alienated the neuroscience community. By contrast, the US BRAIN Initiative set priorities after consulting with neuroscientists, and awarded grants through a conventional peer-reviewed process, ensuring community acceptance.

Now cancer researchers are left wondering how their moonshots will proceed. At the AACR meeting, Biden said that he had met representatives of many cancer-funding projects. “Why is all of that being done separately?” he asked scientists in the audience, noting that progress is accelerated by collaboration.

The privately funded initiatives are more concerned with meeting their own goals — and satisfying their funders — than with coordinating efforts in the field. “I don’t see my role as trying to answer this larger question about how does this all fit together,” says Jeffrey Bluestone, chief executive of the Parker Institute. “I’m focused on how to make sure what we do is impactful for patients.”

But Douglas Lowy, acting director of the US National Cancer Institute (NCI), which is coordinating the government moonshot, notes an overlap with the leadership of the various projects. Soon-Shiong, Bluestone and leaders of immunotherapy initiatives at Johns Hopkins and the University of Texas MD Anderson Cancer Center in Houston are on the government initiative’s advisory panel. And on 18 April, the Biden moonshot launched a website to solicit research ideas. The aim, Lowy says, is to ensure that research areas recommended by the advisory panel do not duplicate topics being covered by the private initiatives.

There is wide agreement on major questions regarding immunotherapy, how­ever. For instance, researchers don’t understand why the approach works in only 15–20% of patients. Combining immunotherapies, and studying what distinguishes patients who respond, could make treatments more effective. Pharmaceutical companies are already developing new drugs and testing therapies in combination. Philip Gotwals, executive director of oncology research at the Novartis Institutes for BioMedical Research in Cambridge, Massachusetts, estimates that industry has spent upwards of $1 billion on the field.

But scientists see a lack of basic cancer immunology research, even in the new programmes. “Many of these initiatives are moving forward ideas that are already out there,” says David Raulet, faculty director of the Immunotherapeutics and Vaccine Research Initiative at the University of California, Berkeley, which began in March.

Many researchers are looking to the Biden project to make a big investment in basic cancer immunology and to address broader barriers to research, such as data hoarding. Gotwals, for instance, notes that the results of industry-sponsored clinical trials now under way could help other companies to decide which approaches to test, but that results are typically not made public until 9–12 months after a trial ends. Companies are reluctant to share data before then, both to comply with regulatory requirements and to protect their intellectual property. “It’s not trivial to figure out how to make that work,” Gotwals says.

Biden seems to be hearing that message. At the AACR meeting, he said that data sharing often comes up when he speaks to scientists about the moonshot. Lowy says that the NCI is already planning to open a Genomic Data Commons in June to host detailed information on cancer patients. Sharing data collected in company-sponsored clinical trials is trickier because patients must give informed consent.

In the meantime, the government moonshot faces a major hurdle: its funding is at the mercy of legislators who may be loath to give US President Barack Obama a victory in his last year in office. “It will be very difficult for us to initiate all of the programmes that we’re looking forward to the blue-ribbon panel recommending if there isn’t funding,” Lowy says.