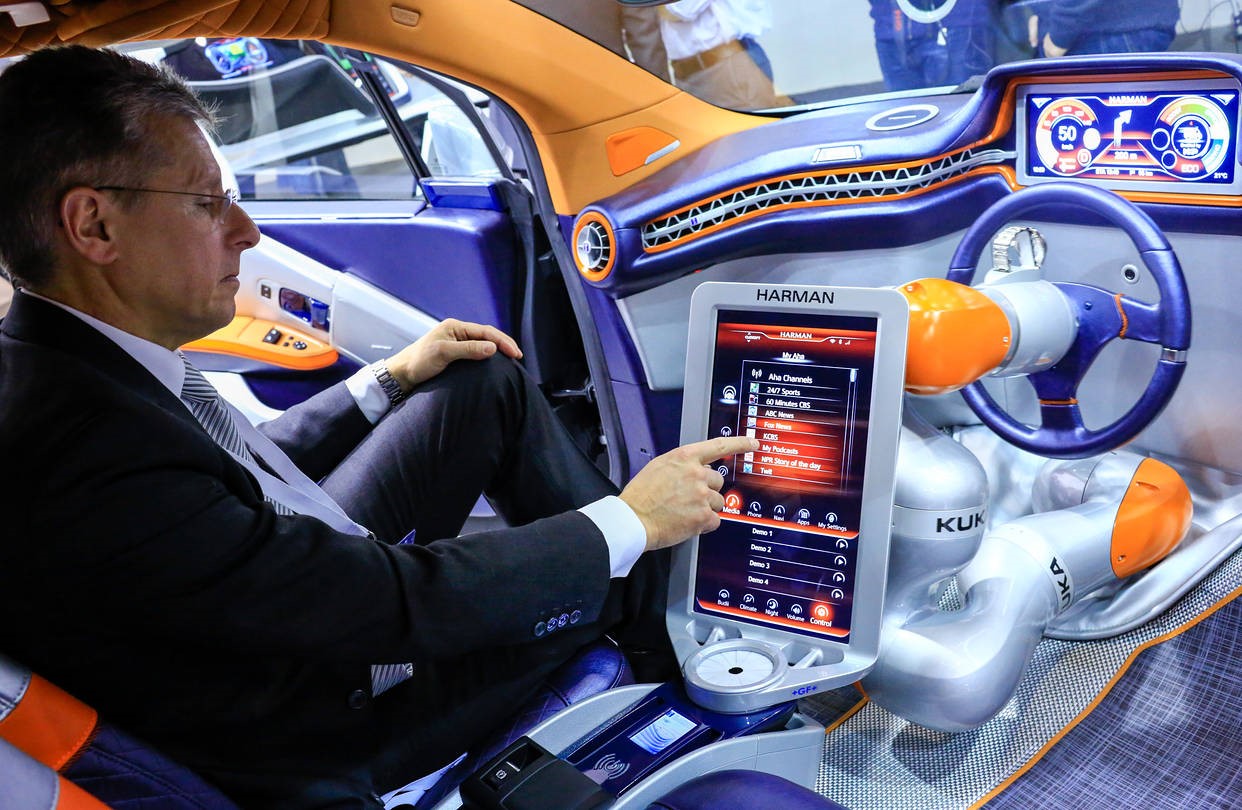 Samsung Electronics Co. is making a drive for control of the car.

The South Korean smartphone maker said Monday that it would buy U.S. auto-parts supplier Harman International Industries Inc., based in Stamford, Conn., for $8 billion in an all-cash deal that instantly makes Samsung a major player in the world of automotive technology.

The deal—Samsung’s biggest acquisition in its history—reshapes the pecking order in the global automotive supply chain, reflecting a quickening pace of innovation and an increased role for companies with deep pockets and a keen understanding of mobile services.

Harman, an audio pioneer that dates back to 1953, has in recent years pushed aggressively into the automotive world under Chief Executive Dinesh Paliwal, and has secured billions in new business, including big contracts with General Motors Co. and Fiat Chrysler Automobiles NV. It has projected an order backlog of $24 billion, more than three times annual revenue, and about two-thirds of its current sales come from auto makers.

Harman has also diversified into software development and components for connected cars. Much of that has been done on the shoulders of major acquisitions such as a $780 million deal last year for Mountain View, Calif.-based software services company Symphony Teleca.

In a statement, Mr. Paliwal said linking up with Samsung would give the two companies an edge in a competitive field. “Partnerships and scale are essential to winning over the long term in [the] automotive” industry, he said.

By becoming a direct supplier to the world’s biggest automakers, Samsung will gain insight into the changing behavior of consumers as the lines blur between the auto and mobile industries.

A Harman concept car at the Mobile World Congress in Barcelona, Spain, in February. The company has in recent years pushed aggressively into the automotive world under Chief Executive Dinesh Paliwal. PHOTO:BLOOMBERG NEWS

The acquisition pushes Samsung’s complicated relationship with Apple Inc. and Google parent Alphabet Inc.—the South Korean company serves as both a partner and a rival—into a new arena. Apple, Google and technology upstarts such as Tesla Motors Inc. and Uber Technologies Inc. are all trying to reshape the auto industry and have been working on self-driving cars.

Other technology companies eyeing the automotive industry for expansion includeQualcomm Inc., which last month agreed to pay $39 billion for NXP Semiconductors NV, the world’s largest developer of chips for automobiles.

Samsung will now have a place among names like Denso Corp., a major supplier to Toyota Motor Co., German mega-supplier Robert Bosch GmbH and Sweden’s Autoliv Inc., a safety-components supplier that has benefited from troubles caused by rival TakataCorp.’s air-bag recalls.

The largest auto suppliers boast revenues of $20 billion or more annually, giving them ample resources to invest in the type of research and development needed to drive change in the capital-intensive auto industry.

Auto makers rely on suppliers for an increasing amount of technology in their cars. Samsung knows this well, serving as a provider of costly and complex lithium-ion batteries to Nissan Motor Co. and several others, battling it out with other major battery makers for several years. It is also the world’s biggest producer of memory chips that go into virtually every consumer electronics product.

For Samsung, the acquisition of Harman is a rare megadeal for a sprawling company that has long preferred to develop its own technologies in-house.

Samsung doesn’t plan to make cars itself, according to people familiar with executives’ thinking, but the company sees automotive technology, and the broader shift toward connected, driverless vehicles, as a promising growth area to sell more of its semiconductors, display panels and mobile services.

Samsung’s third-generation heir Lee Jae-yong has sat on the board of directors of Exor SpA, the controlling shareholder of Fiat Chrysler Automobiles NV, for the past four years, and Samsung last year assembled a task force to look into different ways to jump into the automobile world.

But after looking at how long it would take Samsung to build up those capabilities internally, executives decided that it would be much faster to make an acquisition, according to people familiar with the matter, who added that talks with Harman began during the summer.

As part of the deal, which is subject to approval by Harman shareholders, Harman will remain an independent subsidiary of the technology giant. Samsung will pay $112 a share in cash for Harman, which generated roughly $700 million in net profit on $7 billion of revenue last year. Harman’s shares traded up 25% Monday morning at $109.92.

The deal offers a 28% premium over Harman’s Friday closing price of $87.65 a share, though it is below Harman’s all-time high of about $145 in April last year.

Samsung’s previous record for its largest acquisition was a two-part, $840 million purchase of AST Research in the mid-1990s. Samsung sustained heavy losses before ultimately giving up on Irvine, Calif.-based AST, once the world’s fifth-largest computer maker.

As a result, for nearly two decades, Samsung’s top management remained wary of making big acquisitions, preferring to build technology by pouring investment into research and development. In recent months, however, Samsung has turned to deal-making as a way to instantly build up its capabilities in emerging technologies such as mobile payments, cloud-based services and artificial intelligence.

Samsung, which had a war chest of $71 billion at the end of September this year, has proven its willingness to spend freely to quickly gain a dominant position in a new industry. In just five years, it plowed roughly $3 billion into complex biologic drugs, where it is already one of the world’s biggest players.

This isn’t Samsung’s first try at the automotive industry. In 1994, Chairman Lee Kun-hee launched Samsung Motors, with assistance from Nissan, before being forced to sell control of the company to Renault SA after the Asian financial crisis in 1998.

—John D. Stoll in Detroit contributed to this article.