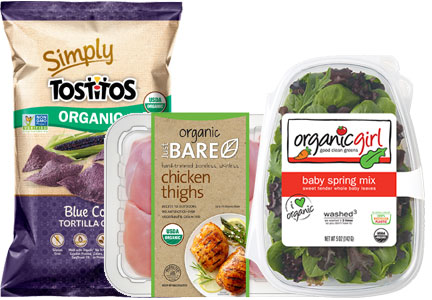 Sales of organic products in the United States rose 11% to a record $43.3 billion in 2015, outpacing the overall food market’s growth rate of 3%, according to a recent report from the Organic Trade Association.

The U.S. organic industry posted its largest dollar gain ever last year with $4.2 billion in new sales, up from the $3.9 billion increase recorded in 2014. Of the $43.3 billion in total organic sales, food sales accounted for $39.7 billion, up 11% from the year before, while non-food organic products contributed $3.6 billion, up 13%.

The organic industry’s dynamic growth may be attributed to greater accessibility, as mainstream retailers offer more organic options than before. Nearly 5% of all food sold in the United States is now organic.

These record results came in spite of supply challenges, as organic production in the United States lagged behind consumption.

“The industry joined in collaborative ways to invest in infrastructure and education, and individual companies invested in their own supply chains to ensure a dependable stream of organic products for the consumer,” said Laura Batcha, chief executive officer and executive director of the O.T.A. “Despite all the challenges, the organic industry saw its largest dollar growth ever. Organic will continue to be the most meaningful farm-to-fork — and fiber — system.”

The fastest-growing subcategory, however, was organic fresh juices and drinks, which grew 33.5% in 2015. Of the eight major organic categories, the fastest-growing was condiments, surpassing $1 billion in sales for the first time, with 18.5% growth.

“Whole foods — produce and dairy — are driving the market,” Ms. Batcha said. “Together, they account for more than half of total organic food sales. The organic market looks like a healthy plate.”

Organic dairy and grains may have recorded more growth last year if greater supply were available, the O.T.A. said. Despite persisting supply issues, however, Ms. Batcha expressed confidence in the industry’s future growth.

“Organic is a bright spot in agriculture and the economy of America,” she said. “Our success will continue to be built on a solid foundation of stakeholder engagement, transparency and meaningful organic standards that consumers trust in.”