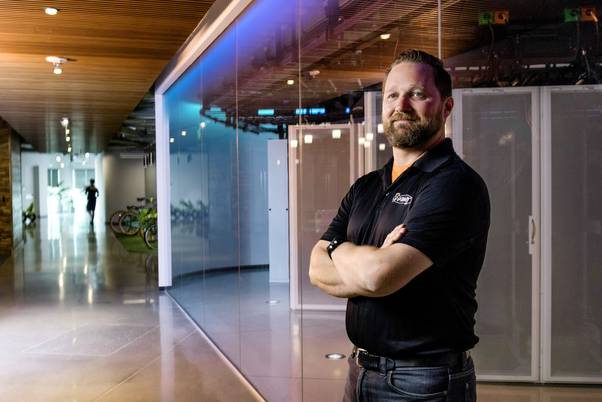 Matt Toeller at GoDaddy’s offices in Arizona. He arrived at the company last July to set policies to steer pay decisions for the company’s 5,000 employees. PHOTO: MARK PETERMAN FOR THE WALL STREET JOURNAL

Here is the truth about your salary: When it comes to pay, most companies are making things up as they go.

Only 38% of employers have a formal compensation structure or philosophy guiding their pay decisions, according to PayScale Inc., which examined data from some 7,600 firms, mainly from the U.S., Canada and United Kingdom. The issue is especially acute in salaried roles, say compensation experts, because managers have more leeway to put a figure on an employee’s skill, experience and performance than they do with hourly positions.

Yet as the labor market improves, and as fair-pay laws in California and elsewhere put a spotlight on corporate pay practices, firms are starting to rethink the way they set salaries. Among employers with no formal strategy in place, PayScale found that 34% are developing one.

Some companies are taking a hard look at their pay practices, partly because they realize employees “want to trust the organization and that someone is looking out for their interests,” said Steve Gross, a senior compensation expert at human-resources consulting firm Mercer. When pay decisions rely on imperfect data and gut instincts, gender bias and other ills creep into compensation decisions, human-resources managers say.

Salesforce.com Inc. has committed to reviewing salaries regularly to excise gender disparities, and Mission Produce Inc., one of the world’s largest producers of avocados, earlier this year implemented a pay structure in response to young employees’ requests to “take the mystery out of compensation,” said HR chief Tracy Malmos.

A look at how one company, web-services firm GoDaddy Inc., overhauled its pay structure illustrates how and why employers are trying to bring greater transparency and logic to compensation.

Until recently, GoDaddy, which has headquarters in Scottsdale, Ariz., and offices in Kirkland, Wash., Silicon Valley and several other U.S. locations, was like many companies when it came to pay decisions.

“The process was, ‘what did we pay the last person? Let’s pay the new person what the last person was making,’ ” said Matt Toeller, who arrived at the company last July to set policies to steer pay decisions for GoDaddy’s 5,000 employees. Some employees were paid too little, while others earned too much based on their location or experience.

Companies that do have pay guidelines typically aim to pay at the 50th percentile, or median, of the range that similar employers pay for a given role, with a spread of, say, 20% on either side based on a new hire’s experience and skills, according to Mr. Gross. Companies purchase salary-benchmarking data from firms like Mercer, PayScale and Willis Towers Watson.

GoDaddy managers weren’t using outside pay data until shortly before Mr. Toeller joined. The company now pegs pay at the 70th percentile of the market rate for engineering roles, he said. To better match GoDaddy’s workforce to the broader benchmarking data, his team spent nearly four months mapping out job descriptions, which they used to create levels for each title—such as software development engineer—to reflect the range of workers’ skills and responsibilities.

Each level has a pay grade with a wide salary range. For example, a Software Developer III in GoDaddy’s Sunnyvale, Calif., office could earn $101,000 to $165,000 a year, depending on factors like performance and depth of skills. Under the new system, some 6% of GoDaddy’s workforce got automatic raises to bring them into the correct pay grade.

Before the structure, pay “was really fast and loose,” said Leslie Phillips, a senior communications manager who started at GoDaddy in 2006 in tech support. “Now it makes a lot more sense, and I wonder why we didn’t do it sooner.” She got a raise of about 15% at her last performance review, the result of a promotion, a merit increase and an adjustment into the new pay scales.

One challenge: determining the right degree of transparency. Mr. Toeller and other HR staffers canvassed a swath of employees, and received suggestions that ran the gamut from total secrecy to total disclosure. Ultimately, the company decided to include level and salary range on employees’ annual pay statements, so they know where they stand.

The changes have eased conversations about pay between managers and employees, saidArleen Hess, a manager in the company’s digital crimes unit. “It’s an emotional and personal conversation, and this lets us have that conversation constructively.”

Elsewhere, a hot job market is forcing some employers to adjust pay more often than before. New hires at Threshold Group, a Seattle-based wealth manager with about 50 employees, sometimes outearn employees hired when the market was cooler. To retain veterans, the firm now adjusts salaries upward to reflect the market and ensure parity with newcomers.

“A lot of companies get stuck in, ‘we’re paying this person what we brought them in at and they’re fine,’ so they don’t make those adjustments,” said Chelsea Giusti, who designed Threshold’s compensation strategy last year.