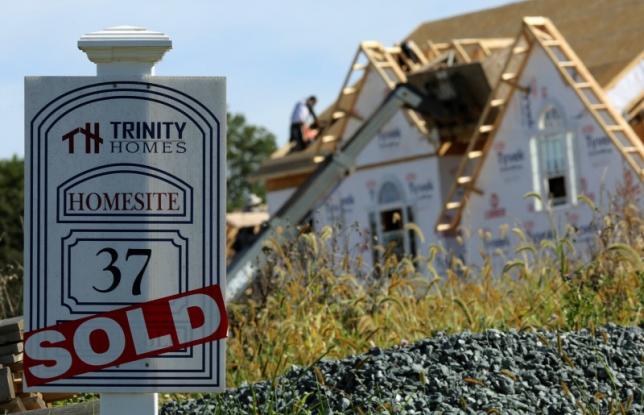 New U.S. single-family home sales unexpectedly fell in March, but the decline was concentrated in the West region, suggesting that the housing market continued to steadily improve.

The Commerce Department said on Monday new home sales decreased 1.5 percent to a seasonally adjusted annual rate of 511,000 units. February’s sales pace was revised up to 519,000 units from the previously reported 512,000 units.

New home sales are volatile month-to-month because they are drawn from a small sample. While sales have now declined for three straight months, this likely does not signal a slowdown in the housing market given a buoyant labor market.

“Through some of the short-lived ups and downs in the data, it still appears that new home sales are trending higher over time,” said Daniel Silver, an economist at JPMorgan in New York.

Economists had forecast new home sales, which account for about 8.7 percent of the housing market, rising to a 520,000 unit-rate in March. New home sales surged 18.5 percent in the Midwest and climbed 5.0 percent in the populous South.

But sales plunged 23.6 percent in the West, reversing February’s 21.7 percent jump, and were flat in the Northeast.

U.S. financial markets were little moved by the data, with investors on the sidelines ahead of the Federal Reserve’s policy meeting on Tuesday and Wednesday.

The U.S. central bank is expected to kept its short-term interest rates unchanged, but its statement accompanying the rate decision will be scrutinized for clues on the near-term outlook for monetary policy.

A report last week showed a 5.1 percent surge in sales of previously owned homes in March.

The housing market is bucking a broadly weak economy, with data such as trade, industrial production, business spending and retail sales suggesting the economy lost considerable momentum in the first quarter after logging a 1.4 percent annualized growth rate in the fourth quarter.

First-quarter gross domestic product growth estimates are as low as a 0.3 percent rate. The government will release the advance first-quarter GDP estimate on Thursday.

The demand for housing is being fueled by the robust labor market, characterized by the lowest unemployment benefit claims since 1973, and mortgage rates near record lows. Labor market strength has increased employment opportunities for young adults, boosting household formation.

“With continued improvement in the labor market leading to higher incomes, and borrowing costs that remain low, the fundamentals remain supportive. We expect new home sales to advance throughout 2016,” said Kristin Reynolds, a U.S. economist at IHS Global Insight in Lexington, Massachusetts.

But a shortage of properties for sale, which is limiting choice for buyers and driving up prices, remains a constraint for the housing market.

While the inventory of new homes on the market rose in March to the highest since September 2009, new housing stock remains less than half of what it was at the height of the housing bubble.

At March’s sales pace it would take 5.8 months to clear the supply of houses on the market. That was the most since last September and was up from 5.6 months in February.