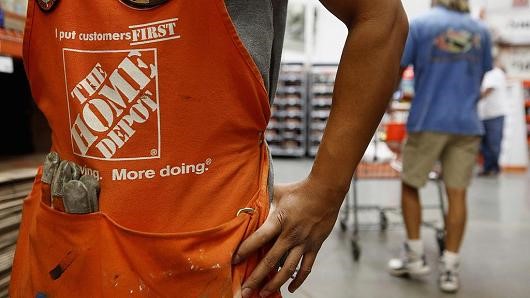 Home Depot, the world’s biggest home improvement chain, reported a 9 percent rise in quarterly sales on Tuesday, saying that inconsistent weather drove demand across the board.

Home Depot shares were down about 1.6 percent, after initially jumping in premarket trading following the announcement.

Horvers said that growth for a company of Home Depot’s size was “outstanding,” but investors are jittery following a rough earnings quarter for retail.

“We think the stock pulls back here, but ultimately the business is going to re-accelerate and the stock will accelerate,” he told CNBC’s Squawk Box.

Analysts expected Home Depot to post earnings of $1.36 per share on $22.39 billion in revenue, according to a consensus estimate from Thomson Reuters.

The retailer boosted its full-year adjusted earnings guidance to $6.27 per share, compared with the current consensus of $6.23 a share.

Oppenheimer Senior Research Analyst Brian Nagel said home improvement continues to attract the consumer at a time when Americans are more selective about where they spend their money.

To maintain its high growth levels, the company needs to draw in more professional customers, such as contractors, he told CNBC’s “Squawk Box.”

The home improvement retailer was hoping to build on a strong finish to last year. In the fourth quarter, Home Depot posted sales growth of 9.5 percent from the prior-year period.

In February, the company said it planned to hire 80,000 workers nationwide for spring, which it called “the company’s busiest selling season.”

Home Depot shares have climbed about 3 percent this year, gaining slightly more than the S&P 500. The stock has risen about 20 percent in the last year, blowing past broader market performance.

— Reuters contributed to this report.