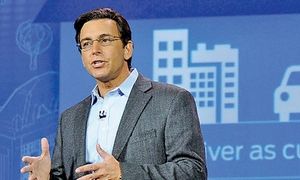 DETROIT — Ford Motor Co. today said its net income quintupled in 2015 to $7.4 billion, including $1.9 billion in the fourth quarter, as sales of its high-margin pickups and SUVs surged in a record year for the U.S. auto industry.

The company earned a fourth-quarter record of $2 billion in North America and its first full-year profit in Europe since 2011. UAW workers will get their largest profit-sharing bonuses ever, averaging $9,300.

Before taxes, Ford earned a profit of $10.8 billion, a company record. It reaffirmed its expectation to match or beat that result this year.

“We promised a breakthrough year in 2015, and we delivered,” Ford CEO Mark Fields said in a statement. “In 2016, we will continue to build on our strengths and accelerate our pace of progress even further, while transforming Ford into both an auto and a mobility company and creating value for all of our stakeholders.”

Ford’s fourth-quarter net income swung from a loss of $2.5 billion a year ago, after a restatement related to pension accounting, to a profit of $1.9 billion. Its operating profit for the quarter, excluding special items, was $2.3 billion, equal to 58 cents a share. That compares to Wall Street expectations of 51 cents.

Automotive operating cash flow for the year more than doubled to $7.3 billion. Ford said cash flow in 2016 will be strong but less than in 2015.

The full-year North American profit of $9.3 billion means Ford will give its 53,000 hourly workers profit-sharing payouts averaging $9,300, which is $500 more than the previous record. Workers received a $1,500 advance on that bonus last fall as an incentive to approve a new labor contract. The payouts for 2014 averaged $6,900.

In Europe, Ford earned $259 million. It was profitable in all of its global regions except South America.

In the first half of 2015, Ford’s revenue and profits were hampered by low availability of the aluminum-bodied F-150 pickup. U.S. sales of the F-series, Ford’s top-selling and most lucrative nameplate, ended the year up 3.5 percent.

Ford sold 7.8 percent more SUVs and crossovers in 2015, after redesigning the Edge and MKX and freshening the Explorer. Explorer sales reached their highest level since 2004.

“The U.S. market is hungry for the same products Ford specializes in, with sales growth for the F-150, Explorer and Edge generating strong income last year,” Karl Brauer, a senior analyst with KBB, said in an email.

“The concept of developing and committing to a long-term global product plan, instituted under Alan Mullally and maintained by Mark Fields, is working for Ford.”