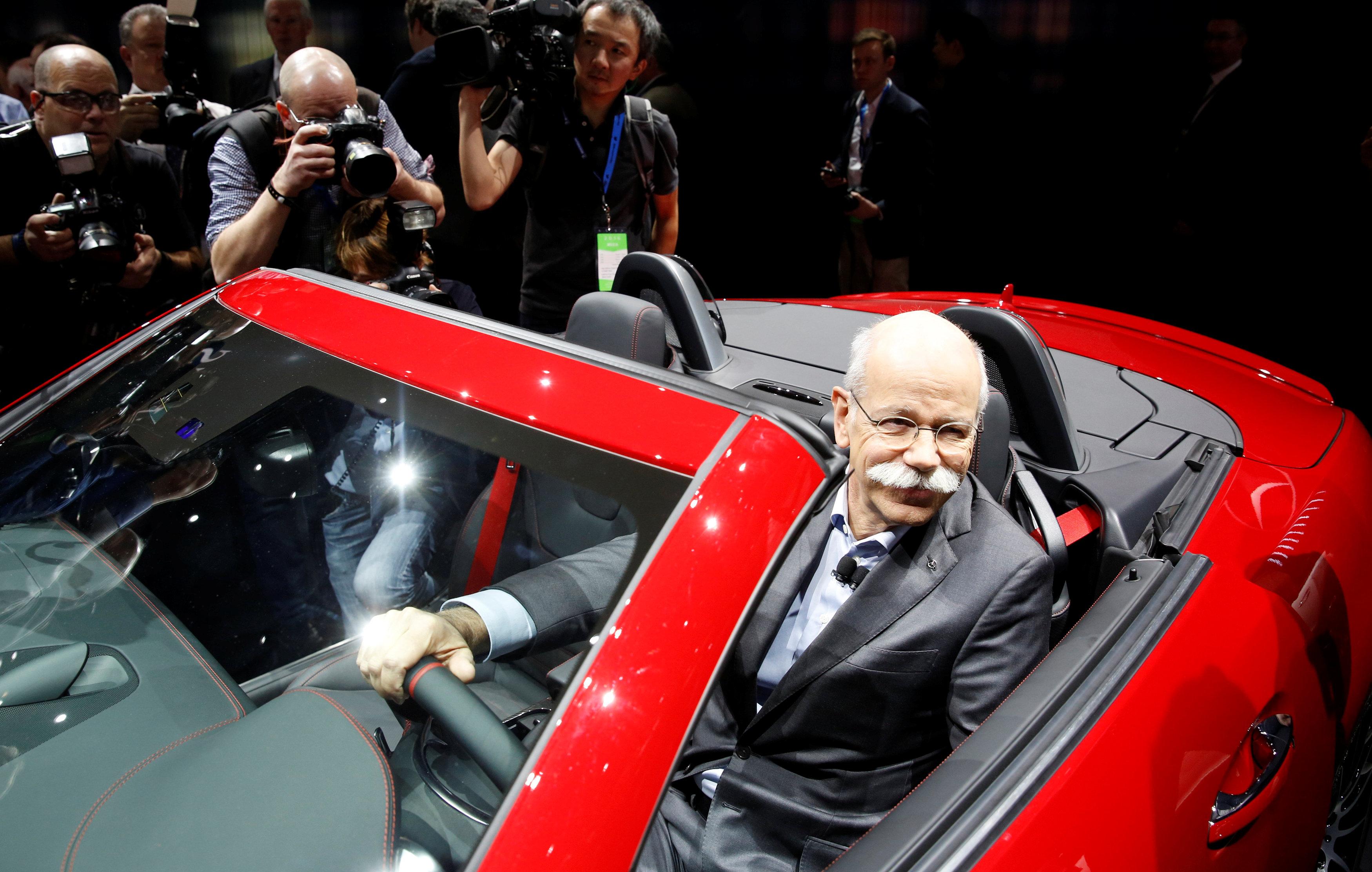 Daimler chief Dieter Zetsche is sweeping away layers of bureaucracy and encouraging a more experimental approach to new products. Daimler sources say Zetsche’s reforms have been influenced by the company’s dealings with Tesla when it was a shareholder, as well as techniques studied at other Silicon Valley companies. Photo credit: Gary Cameron/REUTERS

CEO Dieter Zetsche is sweeping away layers of bureaucracy and encouraging a more experimental approach to new products. He has also asked 144 employees — many of them from the rank and file — to generate new leadership ideas, according to sources at the German luxury automaker.

These are big changes for a company known for strict hierarchies and meticulous planning, and follow a trip by around 100 top managers to Silicon Valley last summer when they met executives from companies including Apple, Google and Uber.

The changes will be closely watched by rivals such as BMW and Audi as traditional carmakers weigh how to respond to new technologies including autonomous driving and electric vehicles that have turned companies such as Google and Tesla into rivals.

Daimler, whose founder invented the modern automobile 130 years ago, is investing heavily in electric vehicles and Zetsche has decided that in order to succeed, the company, as well as its product range, needs an overhaul.

Outlining some of his plans in June, he likened Daimler to a rhino but said its size — with twice Tesla’s market capitalization and 20 times the number of staff — did not mean it couldn’t also be nimble and decisive.

“Rhinos are large, but they are not slow,” Zetsche said.

Alexander Hilliger von Thile, a senior graphics and rendering manager at Mercedes-Benz research and development in North America, said Daimler was now encouraging ideas from all team members and not just the bereichsleiter or department chiefs, as well as greater collaboration.

“We do not want to have experts who know everything, who sit somewhere and don’t talk to anybody,” he told Reuters.

Daimler, like many traditional carmakers, was initially skeptical about prospects for electric vehicles. According to a senior executive, Zetsche used to joke that Daimler, which owned a stake in Tesla from 2009 to 2014, was the only automaker to make money from electric cars when it sold out of that investment.

But advances in battery technology and the success of the Tesla Model S, which last year outsold Mercedes’s flagship S class in the United States, have changed that.

The risks associated with releasing new technologies, however, were laid bare earlier this year when Tesla shares tumbled after news that a driver of one of its cars had been killed while using Autopilot mode, an advanced cruise control tool that other automakers have taken a more cautious approach to introducing.

Daimler sources say Zetsche’s reforms have been influenced by the company’s dealings with Tesla when it was a shareholder, as well as techniques studied at other Silicon Valley companies.

Working on various projects with Tesla, a clash of cultures was clear from the outset.

“One party (Daimler) wanted to plan and think things through. The other (Tesla) acted on a ‘shoot and aim’ principle correcting things as you go along,” one Daimler source told Reuters, adding Tesla was often faster at implementing new technologies as a result.

Daimler has learnt from this and is now moving more quickly, with its new 144-strong brainstorming team including engineers who worked on projects with Tesla, the source said.

So far, Daimler staff have generated around 150 ideas, of which 80 percent have been implemented. The results are confidential, although it is clear that in future, decisions should be reviewed by only two management levels instead of up to six, the source added.

Another major change is to allow departments to fund an idea even if it is not clear what products will result from the spending. Having a perfect “specification sheet” used to be a precondition for investment.

“They were mostly interested in the ways that our entrepreneurs brought their ideas to market, and how La Cocina, as an organization, supported that type of innovation,” La Cocina director Caleb Zigas told Reuters.

As much as speeding up decisions, Zetsche’s reforms are focused on engaging and retaining staff.

Tesla’s success has given rise to a raft of rival electric-vehicle makers, including Faraday Future, Borgward and Future Mobility Corporation, and traditional carmakers have seen several high-profile defections.

Carsten Breitfeld, CEO of China-based Future Mobility Corp., switched in July from BMW, where he was head of the i8 electric vehicle program but grew tired of the cumbersome approval processes at large corporations.

“At the end of the day I get the impression that the traditional car companies, not only BMW, will not really be able to follow the pace and do the big steps which will be needed,” he told Reuters, explaining his decision to move.

Marissa Peretz, founder of headhunting firm Silicon Beach Talent and a former recruiter at Tesla, said a corporate culture of freedom was key to success.

“Tesla offered employees ownership and entrepreneurial freedom. To make changes at an established company is a bureaucratic process. Tesla’s success has given executives the confidence to consider joining other start-up carmakers,” she said.

Daimler, however, believes it can be at least as successful as Tesla in forging an entrepreneurial community without becoming too reliant on centralized organizational structures and concentrating decision-making responsibilities with key senior staff.

Mercedes engineers have spread the knowledge for how to build its electric cars across a broad team which keeps some of its key know-how in books that are available in print only — to prevent anybody emailing them.