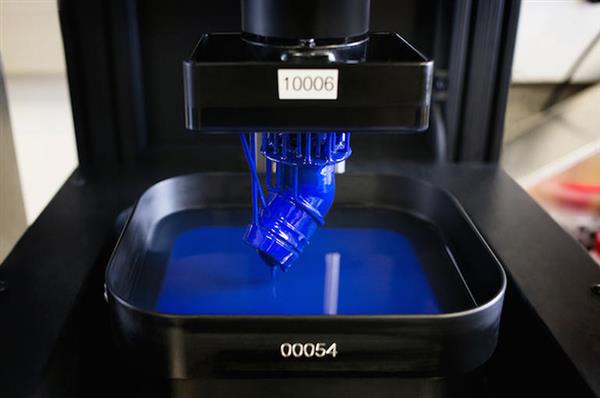 Ford Motor Co. is experimenting with a new form of 3-D printing the auto maker says could solve a structural flaw that has kept the technology from widespread use in manufacturing.

The ability to “print” parts within an assembly plant would drastically reduce transport and logistics costs for the auto industry, where car makers must source parts from dozens of suppliers around the world. But the most widely used version of the technology is ill-suited for mass production because objects are printed layer by layer, a slow process that also creates tiny fault lines that can crack when stressed.

A startup backed by Alphabet Inc.’s Google Ventures is developing a different 3-D printing method that some manufacturers, including Ford, say shows more promise. Carbon3D Inc.’s printers project light continuously through a pool of resin, gradually solidifying it onto an overhead platform that slowly lifts the object up until it is fully formed. The process takes a fraction of the time of other printing methods, and forms solid items more similar to those created using conventional auto-part molds, said Ellen Lee, who leads a 3-D printing research division at Ford.

To be sure, Carbon’s technology isn’t likely to find its way to the factory floor soon. The company expects to ship hundreds of the printers this year, but its method is too costly to be used on a large scale. Manufacturers are more likely to deploy 3-D printers for high-margin or customized products, such as parts for airplanes, prosthetic limbs, experts say. 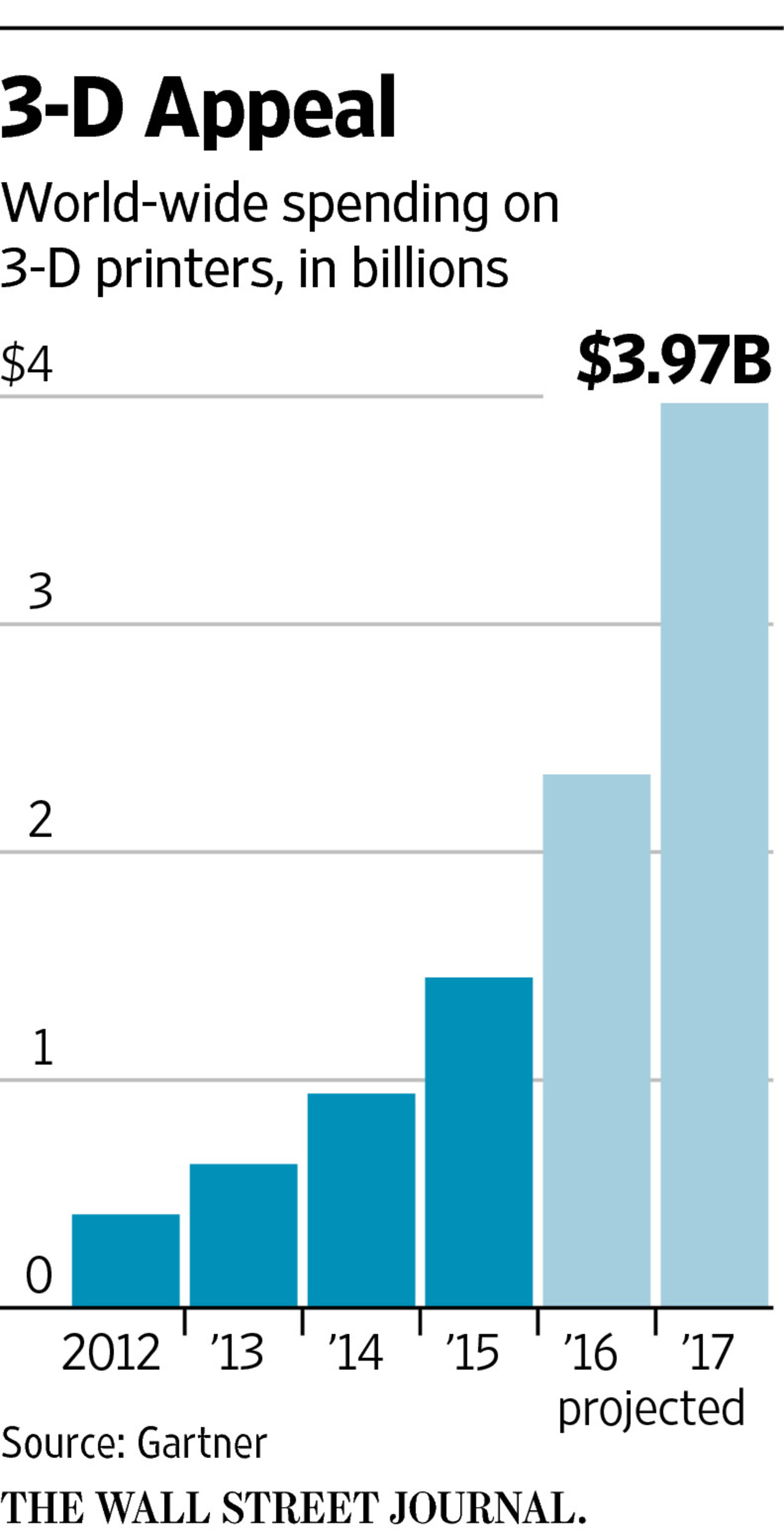 Ford is testing parts made with Carbon’s printers in its research facilities to see whether they can pass performance tests to determine if they’re worth the expense, Ms. Lee said.

“The big challenge is, if we’re making 100,000 vehicles, and we need that many parts, it may just be too expensive to 3-D print all of them,” she said. “It doesn’t compete head-to-head with injection molding.”

Ron Harbour, partner at consulting firm Oliver Wyman, said the entire auto industry is researching for ways that 3-D printing could be used in production to save on expensive tooling costs. But with the amount of time it takes to print the parts, the process would still be more costly than traditional methods.

“If I need 300,000 [cars], I spend X-millions on tools to produce it, and I’m producing one every minute,” he said. 3-D printers may help avoid heavy tooling costs, but if they can’t accommodate that speed, “it’s still going to cost me a whole lot more.”

Meanwhile, a greater variety of materials need to be developed to mimic the properties of the plastics, metals and rubber that go into auto parts, Ms. Lee added.

A growing number of companies expect to use 3-D printing in their supply chains. A survey of 900 supply-chain professionals released this month by logistics-industry group MHI and Deloitte showed 14% use the technology today but 48% expect to adopt the technology within the next decade. Research firm Gartner estimates that world-wide sales of 3-D printers will reach almost $4 billion next year, up from $406 million in 2012.

Ms. Lee’s research unit at Ford was created two years ago to test new technologies in hopes of using 3-D printing to manufacture more complex designs that can’t be created using traditional methods. It can take months to create the molds and tools necessary to manufacture a new part, a process that can drag out longer if engineers need to make changes midway through.

For example, it is difficult to create parts from a single mold with a duct running through their center, a manufacturing problem that 3-D printing can solve. Such parts could have the built-in ability to transfer fluids, eliminating the need for a separate hose to do the job.

Other industrial companies have been experimenting with 3-D printing, also known as “additive manufacturing,” for these benefits. Siemens AG has said the technology can be used to create new geometries for the blades in turbines for better cooling and greater efficiency.

General Electric Co. said it expects to produce as many as 200,000 fuel nozzles for its aviation business using 3-D printing. GE recently announced that a new research center in Pittsburgh will focus on developing uses for the technology across all of its businesses.

Objects printed with Carbon’s machines perform better in tests than other forms of printing because an item that is solid all the way through is stronger than one composed of many layers stuck together, some manufacturers say.

“What intrigued us about the Carbon3D machine…Is if you break the [printed] part in half it looks just like a molded part,” said Chip Gear, owner of The Technology House Ltd., which uses a variety of technologies to print parts for industrial customers.

Carbon’s printer takes 40 minutes to print an object that would take 12 hours on a machine that prints layer by layer, he said.

Carbon leases its printers for $40,000 a year. That compares with more than $100,000 to purchase other types of 3-D printers, Mr. Gear said. Carbon says that cost will fall as it ships more units.

Every breakthrough in cost or speed pushes the bar lower for using 3-D printing in a way that “makes economic sense,” said Steven DuBuc, a supply-chain consultant at AlixPartners LLP. Costs already have been decreasing for the equipment and materials, but “speed increase is probably the single most important thing.”