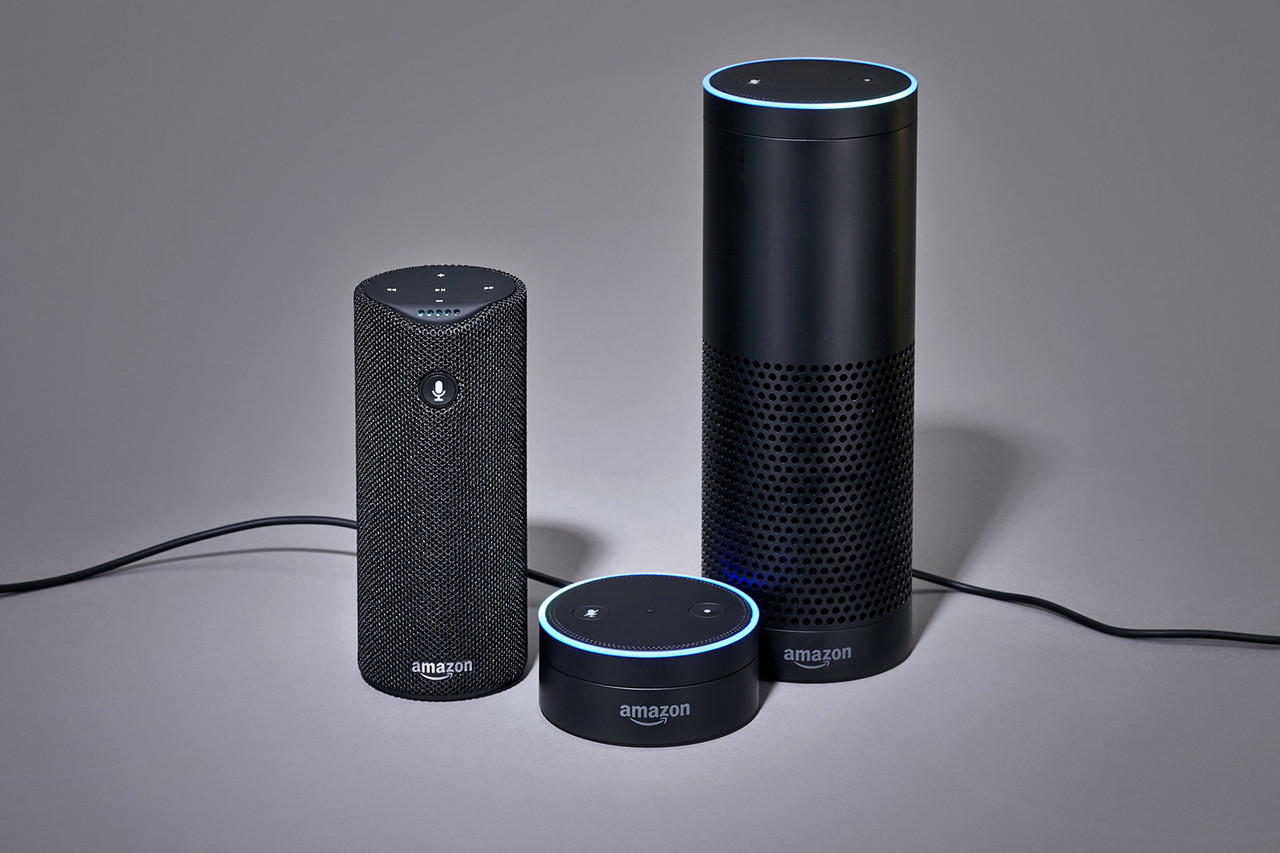 By GEOFFREY A. FOWLER

Millions of people in the last year or so have bought microphones so that Amazon.com could listen in on them at home. I’m one. And I just got more, built into new speakerscalled the Tap and the Echo Dot.

Some day, Amazon could be embedded in appliances, listening all over your house.

Why would you want that? Because your own voice is turning into the best input device since the Enter key. And Amazon has found the first genuinely killer use for it: playing music.

This idea is slightly less bonkers than it sounded in late 2014 when Amazon debuted its Echo speaker and Alexa talking tech. It—or should I say she?—is an artificial intelligence, like the “bot” Facebook introduced for its Messenger this week. When you call Alexa’s name around an Echo, she wakes up and responds in a perky voice.

“Alexa, what’s the weather today,” you can ask from up to 20 feet away. “Right now in San Francisco, it’s 54 degrees,” she responds. With no taps or futzing with apps required, Alexa points to a future where not all tech is crammed onto a smartphone screen.

It’s impressive technology, though Alexa herself has a long journey ahead. The $180 tube-shaped Echo was a dud when I reviewed it in early 2015. Because I mostly just use Amazon for shopping, Alexa didn’t know enough about me—my contacts, my messages, my travels—to even be a bumbling assistant like Apple’s Siri. And without Google’s smarts, Alexa was downright terrible at Jeopardy. In my house, we primarily used the Echo to set kitchen timers, making Alexa a very expensive spaghetti assistant.

Since then, though, Alexa’s been in school—and is proving how gadgets can become more useful when you just talk to them. Alexa’s always been able stream music, but was limited in her sources. In February, she gained the ability to play Spotify, the all-you-can-eat streaming music buffet. Spotify turned Alexa into an incredible DJ: Now I just name any artist, song or playlist aloud, and the dance party begins. The audio industry is rightly feeling threatened by Alexa: Sonos recently announced a reorganization to prepare for its future making voice-operated speakers.

Now Amazon is waging a full-on talking assault on home entertainment. Last year, it added Alexa’s talents to its Fire TV streaming video box, which includes a microphone in its remote. This month’s new additions to the Alexa family bring her skills to new speakers at lower prices.

The $90 Echo Dot is a smaller Alexa microphone that plugs into the line-in of an existing hi-fi system, so you can listen to music without the compromises of the Echo’s just-OK-sounding tube speaker. One limitation, for now, is that there’s no way to make multiple Dots and Echos around the house play the same song and stay in sync.

The $130 Tap is a battery-powered portable Bluetooth speaker that can also join Wi-Fi networks to connect to Alexa in the cloud. In my tests, it didn’t sound as good as similarly priced and sized models from Beats and JBL—and about the same as the less expensive Jawbone Mini Jambox. Battery life doesn’t stand out, either. But this one has a button on the front that lets you summon any song or playlist with your voice.

Music was Alexa’s Trojan Horse into my house. I’m now busy trying other talents that she’s gaining at an impressive clip. Feeling a little chilly? Ask Alexa to turn up the Nest thermostat. Getting dark? Ask her to turn on the Hue connected lights in the living room. Need some more razors? Ask Alexa to reorder them—this is an Amazon product after all.

At last count, Alexa had over 500 “skills,” thanks to Amazon’s decision late last year to open her to developers, who can make capabilities you add to her. One favorite: Meat Butler tells you how to cook whatever you want. (If you like your steak rare, Alexa recommends serving it at a USDA-flaunting—but chef-approved—125 degrees “to inspire the palate.”)

Alexa is fast, too. Call her name, even if a TV is on elsewhere in the room, and she’ll hear you without the seconds of painful delay you get when you call “Hey Siri” on an iPhone or Apple Watch.

Now, for the sobering reality: Despite what you may imagine, Alexa is not a digital genie. I nearly got into brawl with her over the weekend when I asked her to play Zayn Malik’s “Mind of Mine” album. She heard “Zena” and “Fame”—pretty much anything but the ex-One Direction crooner.

My list of quibbles with Alexa is long enough that I only recommend these products to the adventurous for now. Her response to too many questions is, “Sorry, I can’t find the answer to the question I heard.” If you have more than one Alexa product in a small home, she might try to respond simultaneously in multiple rooms.

You have to learn to speak her grammar, and the more talents she gets, the more awkward the lingo. (“Alexa, ask Mom Jokes to tell me a joke.”) And unless you activate a special lock code, anyone who walks up to Alexa can order things with your Amazon account. I’ve already been pranked by “friends.”

Think of Alexa less like a personal assistant such as Siri, and more like an operating system for the house. A lot of stuff in our homes—fridges, toys, coffee pots, even toilets—have had a harder time participating in the Internet revolution because they aren’t keyboard or touch screen friendly. Recently, Amazon opened Alexa to devices made by other companies.

Life with Alexa has also made it clearer what sorts of tasks don’t lend themselves to operating by voice. Any interaction that requires more than two sentences of back and forth is annoying, including more-considered purchase decisions. Sometimes, seeing a screen of blue links really is the fastest way to the right answer. And Alexa can’t recognize individual voices, so you wouldn’t trust her with sensitive tasks, like unlocking the front door.

The Echo and its new pal Dot are useful because they ensure Alexa is always available, no digging around for a phone. In the new Tap speaker, she loses much of her magic, because you have to press a button to summon her. (Amazon says an always-listening Tap would have had terrible battery life.)

Of course, if Alexa is always available, that means she’s always listening—a giant cultural hurdle. Amazon says it designed the Echo and Dot not to record or transmit any information until they hear the “wake word” Alexa. Also, if you press a button on top to mute it, it physically can’t unmute without another tap. Owners of these devices offer rave reviews, but these are early adopters who aren’t turned off by a little Big Brother. A critical test is how well Amazon will handle an inevitable hack attack on Alexa.

In a year of using the Echo, Amazon’s bot has gone from the butt of jokes in my house to a computer we talk with daily. Even though we continue to depend dearly on our smartphones, it’s clear to me now that many of the breakout gadgets of the future will have ears and a voice of their own.